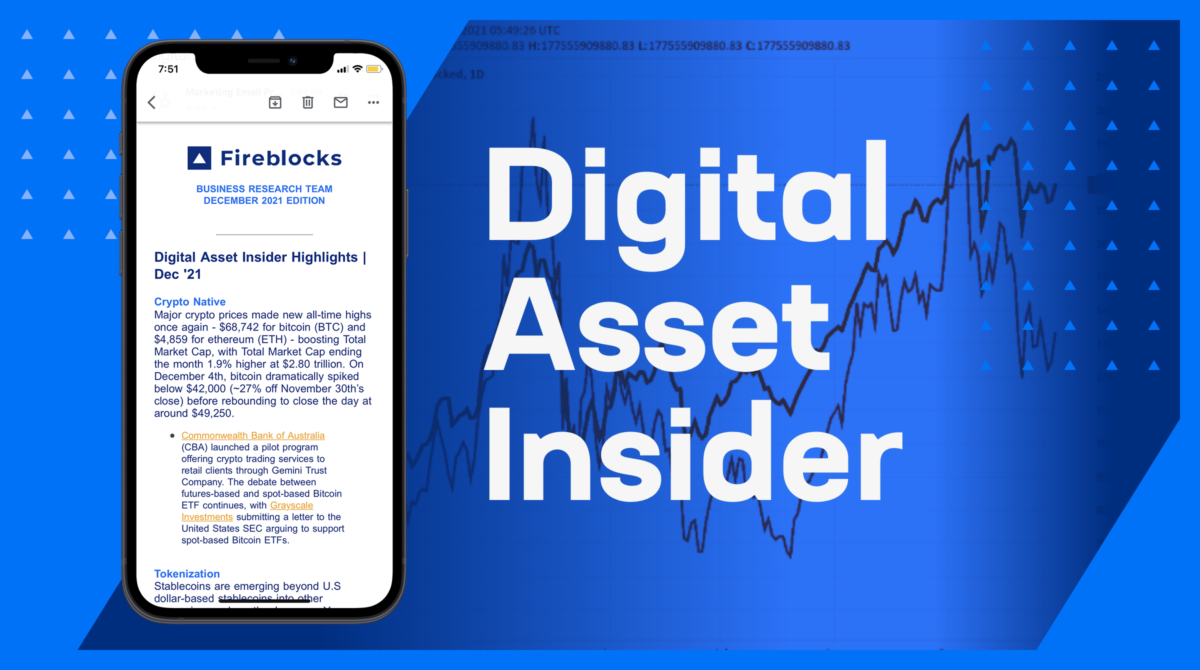 Major crypto prices made new all time highs ($68,742 for BTC and $4,859 for ETH) once again in November, with Total Market Cap ending the month 1.9% higher at $2.80 trillion, versus the prior month at $2.74 trillion.  Existing holders of bitcoin took advantage of the fall in price early in the month:  El Salvador reported to have purchased 100 bitcoin on November 26th and MicroStrategy purchased 7,002 bitcoins over the last two months at an average price of $59,187.  On December 4th, bitcoin dramatically spiked below $42,000 (~27% off November 30th’s close) before rebounding to close the day at around $49,250.  The crash in price was seen to be a move to clear out highly leveraged traders.

The use cases and required technology for tokenization are much better understood by institutions and regulators.  Partnerships will continue to form between technology providers and firms who have already developed platforms for interested participants.  Stablecoins are emerging beyond U.S. dollar-based stablecoins into other currencies, such as the Japanese Yen.  Despite future availability of central bank issued CBDCs, we predict stablecoins will expand into other major currencies over the next 12-18 months.

In 2022, the Bank for International Settlements’ mBridge trial platform will begin its pilot stage involving multiple countries and large financial institutions.  The DTCC has developed a platform to support the transfer of digitized assets and function as a blockchain oracle.

Traditional finance firms continue to explore opportunities in DeFi.  Blockchain protocol foundations have war chests to support the development of projects using their blockchains, including Algorand Foundation, Solana Foundation, and Web3 Foundation.  Blockchain protocols themselves are separately seeking to develop the ecosystem and address weaknesses seen in the early stage of centralized and decentralized exchanges. Crypto-focused firms are acquiring traditional firms to position themselves in the market until there is more regulatory clarity on how digital assets and products will be treated.  Meanwhile, regulatory supported and approved financial institutional digital exchanges formed by TradFi firms are experiencing increases in volumes of assets under custody.  Private centralized finance firms continue to grow and enter into new areas of business in the digital asset value chain and attract capital despite regulatory hurdles in key jurisdictions, such as the United States.  Traditional firms are initiating blockchain related projects to disrupt their existing business and position themselves for the future. Financial regulatory bodies continue to seek clearer definitions around digital assets to better define regulations and guidelines on how to custody, tax and handle the various forms and uses of digital assets.   The implications will flow on to ancillary services that work alongside custodians, including, accountants, auditors and fund administrators.

Wholesale and retail CBDC projects are evolving as central bank participation in pilot projects reveal promising results. If this success continues, wholesale CBDCs could be piloted and rolled out in 2022.  Central banks are focused on new infrastructures for CBDCs and transitioning existing frameworks to these new infrastructures.

With bitcoin’s high energy use making headlines in recent months, companies in the digital asset ecosystem are taking steps to communicate their ESG narrative.  Projects supporting more access to smaller-sized loans through decentralized lending platforms are gaining attention, such as play-to-earn platforms, which have proven their use case in generating real and impactful income for players.

Crypto-native markets rose strongly to new all time highs in November, exceeding the recent highs set in October and have since retraced.  DeFi alternative coins (Alt Coins) remained weak on an individual basis with the exception of Maker, which was over 30% higher versus the prior month.  On Saturday December 4th, bitcoin experienced a “flash” crash that brought all digital assets down in price before recovering from the lows on the day.  One notable exception was Terra (LUNA) which rallied higher after the initial drop, indicating the dynamic nature of how individual projects in the ecosystem are seen and valued.

DeFi coins continued to underperform in November, with the exception of Maker, which held its ground. (Coingecko) Early November a new all time high was set and retraced to the 50.0% fibonacci level.  An uptrend has been confirmed with a higher low ~$53,000 and would need the November high to be cleared for the trend to continue. (Glassnode) Early November set a new all time high and retraced to the 38.2% fibonacci level.  An uptrend has been confirmed with a higher low ~$4,000 and would need the November high to be cleared for the trend to continue. (Glassnode) 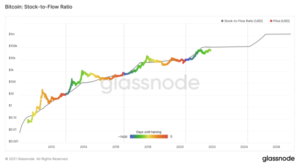 Net outflows were observed as BTC traded below the new all time high which could indicate some unwinding of positions or profit taking by investors. Assets typically flow within a region, likely due to preferences for local exchanges, but flows between regions often occur as a result of regulatory concerns, geopolitical changes, or significant market price variations. (Chainalysis)