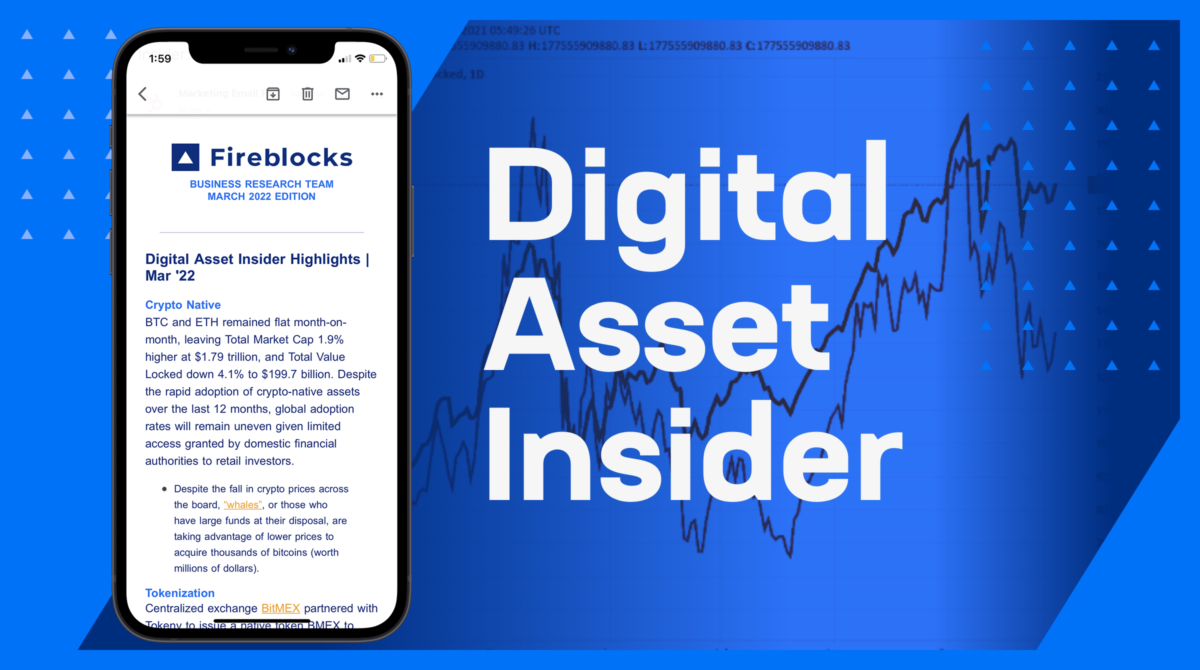 Core digital asset markets ended relatively unchanged for the month. Regulators across the globe are pushing forward with legislation to govern the use of digital assets. We have launched Advisory Services to support firms looking to build their digital asset business. Core digital asset infrastructure is being acquired by traditional finance firms and digital-native firms alike to prepare for the wave of adoption ahead.

New to Digital Assets? Check out our Fireblocks Academy to get up to speed!

Bitcoin and Ethereum remained flat month-on-month, leaving Total Market Cap 1.9% higher at $1.79 trillion, and Total Value Locked down 4.1% to $199.7 billion. Approvals for firms wishing to provide crypto-related services as regulated entities are being processed in the United Kingdom to eventually allow more investor access to digital assets. Despite the rapid adoption of crypto-native assets over the last 12 months, global adoption rates will remain uneven given limited access granted by domestic financial authorities to retail investors. However, moves by El Salvador and other like-minded countries to grow their bitcoin-fueled economy by issuing bonds to build digital asset infrastructure demonstrate alternative ways to gain exposure to cryptocurrencies via traditional financial assets.

We released our Tokenization Whitepaper, exploring use cases involving property, collectibles, and rights to resources. For equities, we do see them being tokenized eventually, but in the interim, a “wrapper” around existing shares as collateral would give access to digital asset investors. Alternatively, a new class of shares could be issued as a securities token directly on a blockchain. Interestingly enough, tokenization is being used to free tokens staked to generate additional return, termed “liquidity staking”. Using non-fungible tokens for encapsulating real estate property ownership is another form of tokenization that is gaining more attention, as more and more uses of the technology emerge to reduce transaction friction.

Regulation of digital assets is taking shape in various forms to enable greater financial inclusion; examples include threshold requirements for the reporting of crypto-transactions to tax authorities, the usage of digital assets, and the pursuit of Bitcoin as legal tender by countries other than El Salvador. A number of countries are seeking to attract crypto-firms and activities by streamlining regulations and creating crypto-friendly headquarters for firms.

Decentralized applications (dApps) especially on ethereum virtual machine (EVM) compatible chains, will see more interoperability benefits with the launch of more parachain projects on Polkadot/Kasuma, Cosmos, and bridges to Layer-2’s like Polygon. This will help increase total value locked (TVL) and expand the whole decentralized finance (DeFi) ecosystem. However, as blockchains fight it out for development on their chains through incentives, it could cause volatility in TVL in the initial stages of growth.

Centralized finance lender, Blockfi, has settled with the United States Securities and Exchange Commission (SEC) and thirty-two American states in its case surrounding unregistered securities. Traditional finance firms are acquiring the technology that will allow them to provide their clients access to digital assets.

In 2020, collaboration between central banks on projects to test blockchain technologies used to issue, transfer and settle CBDCs, yielded mostly positive results. Behind the scenes, the need for legislation to allow CBDCs and other digital assets to be used is a clear agenda item for financial regulators and governing authorities to address. Clear regulations and guidelines will allow CBDCs to operate smoothly and with scale.

Governments are supporting projects focused on eligible green climate and environmental initiatives by issuing green bonds in order to meet emission targets committed to by 2030 and 2050. The crypto-mining industry is taking steps to source energy from greener sources and find ways to harness wasted energy emitted from their mining operations.

The first half of February saw Bitcoin reach prices around $45,000, but it failed to maintain momentum as risky assets came under pressure from growing concerns surrounding Russian military forces encroaching the border of Ukraine. February crypto-native markets traded within the prior month’s range, with many DeFi alternative coins (Altcoins) setting lower lows during the month. Both BTC and ETH ended the month with little change, and Altcoins ended lower between 8%-11%. All crypto-native markets trended lower in the second half of February after brief moves higher at the start of the month. Total Value Locked (TVL) for protocols BSC, Fantom and Solana, moved lower for most of February. However, Fantom TVL jumped upon the entrance of dApp Solidex ($2.2 billion TVL), which is one of the key players involved in what is being termed the “Solidly Wars”.

Altcoins closed modestly lower by between 8%-11% with BTC and ETH both ending flat. Bitcoin tested the area around $45,000 on a number of days in February, fell after the middle of the month, moved towards the low set in January which held, and saw price rebound to end flat month-on-month.  Interestingly, the start of March saw the price jump towards the $45,000 resistance area. Ethereum found resistance at $3,200, failed to make a break higher mid-month, and fell back towards support around $2,400 before closing the month flat.

There were only 3 days in February that saw net inflows into exchanges with BTC price range bound. Regional flows within Eastern Asia and North America held over $150 million, which was lower than seen in the prior month where flows were above $200 million in these regions.

There were higher flows from a percentage change perspective in Western Europe and Rest of World, but still lower than what had been seen in 2021.