Tokenized bonds and decentralized finance (DeFi) in-combination use cases could generate interest with a SocGen proposal to use tokens it issues as collateral for DAI stablecoin loans. Digital asset firms are meeting traditional finance half way in some respects by obtaining licenses that allow them to provide secondary markets for tokenized products that include tokenized private equity funds and security tokens. Networks and custody solutions would be essential regardless for tokenization to function and could be minted on permissioned or permissionless protocols.

U.S. regulators are ramping up their engagement of the crypto market players and spelling out the need for regulatory oversight of the industry. Singapore approved new digital asset licences this month that allow the use of digital tokens for payments and access to digital asset markets. Switzerland approved its first digital exchange through which institutions may trade and custody digital assets, and also approved a crypto focused fund for qualified investors to access.

The regulatory scene has seen further progress towards allowing investments into crypto assets at the institutional level and providing licensing to operate in a regulated environment. Multiple jurisdictions continue to develop their regulatory frameworks and approach to the crypto market.

Central bank initiated pilot projects with BIS are underway and have yielded preliminary results of their transfer trials which are showing positive results in terms of transaction speeds and expected cost reductions. The BIS also released a report supporting public and private cooperation for a global payment system.

U.S. Federal and State regulators continue to challenge the nature and characteristics of interest bearing products that DeFi and CeFi lending firms are offering, arguing that they meet the Howey test of an investment security. Coinbase reluctantly pulled their Lend project on the threat of being sued by the SEC, while Celsius Network is feeling the heat from Alabama, Kentucky, New Jersey, and Texas for offering unregulated securities. Meanwhile, two DeFi firms have experienced what appear to be ‘fat finger’ errors in protocol or smart contract code leading to sizable losses to the firms, the funds of which they are seeking to recover from the recipients or have been able to recover.

China adds to cryptocurrency woes by banning crypto payments and services adding to the mining ban earlier in the year.  Centralized exchanges outside of China had responded by restricting new registrations of China-based residents.  Binance’s jurisdictional regulatory challenges remain, but are seeking to address compliance concerns.

China’s actions on banning crypto trading and mining had taken some wind out of the sails of crypto prices temporarily,  but their actions were not entirely unexpected given their focus on rolling out the digital yuan.

The actions being taken involving Binance since July is significant as it demonstrates the toughening regulatory environment as increased interest emerges in crypto assets.  The nature of products being offered by CEX like Binance has also been challenged as financial products which could or should fall under the definition of financial products that should be regulated such as BTC futures dominated by unregulated Binance vs regulated CME futures ($3.37B vs $2.07B, Skew, October 4).

Digital asset institutions are adapting their business models to include pursuing traditional finance custodial licensing or partnerships that will allow them to provide or continue to provide custody-related services involving digital assets in their jurisdictions.  This could be seen to be transitory actions taken by digital asset participants to bridge the market view of custody and what the blockchain ecosystem provides.

More countries have outlined their strategies or announced their intentions to pursue their own CBDC and are looking at how CBDCs could be useful to their financial systems.

Crypto-native markets struggled through much of September after the August move higher.  Markets had been under pressure due to a number of factors during the month starting with exchange outages, September being seen as a seasonally weak month, and weak technicals.  Bitcoin ‘whales’ were noticed by ‘whale watchers’ to ‘buy the dip’ at lower prices indicating continued interest in acquiring crypto and being supportive of prices.  DeFi and related alternative coins (Alt Coins) remained a hot topic in September even while Alt Coins came under selling pressure which may be indicative of their correlations with the main coins such as BTC and ETH, or it could be a reaction to the issues being faced by CeFi lending platforms which could have a flow on effect to the DeFi lending business model.

Prices fell in all the key markets MoM with DeFi markets experiencing large falls in price between 14-33% possibly linked to U.S. regulator action on CeFi lending platforms during the month. (Coingeko)

Top 10 Coins: Solana market cap rose the most in September by 29% with Dogecoin falling 27%. (Coingeko) Price set a lower high and retraced over the month towards $40,000. (Glassnode) Price retraced and unable to reach the all-time high set around $4,400. (Glassnode)

Significant net outflows occurred on September 10 as price fell from $52,000 down towards $42,000. Outflows had moderated since then. Intra-regional flows remained strongest within Western Europe, were somewhat flat within Eastern Asia with flows lower overall in North America based on the percentage change in regional flows.

Assets typically flow within a region, likely due to preferences for local exchanges, but flows between regions often occur as a result of regulatory concerns, geopolitical changes, or significant market price variations. (Chainanalysis) 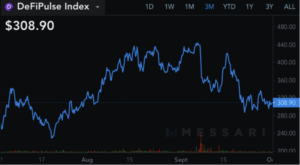 Top 5 Tokens: Uniswap, Aave, Maker, Sushiswap and Synthetix which nudged Compound out of the Top 5 this month. Index information can be found at the Tokensets site: www.tokensets.com/portfolio/dpi (Messari)