May was a difficult month for the digital asset space, but despite all of the volatility, investments into blockchain technologies continued to be developed and rolled out. Regulators are taking steps to introduce regulation around stablecoins, and are continuing to focus on protecting users from hacks. Checkout.com also became the first PSP to launch a settlement solution that allows automatic fiat-to-stablecoin conversion for its merchants, powered by Fireblocks.

Financial firms are starting to offer institutional clients digital asset services beyond bitcoin. The United States Securities and Exchange Commission (SEC) provided guidelines on the requirements for spot-based exchange traded fund (ETF) to be approved. Digital asset exchanges continue to expand their licensed footprint in the Middle East, Europe and Asia, as well as expand their range of financial services offered to their users.

Advances made in blockchain technology can give developing nations and their economies the ability to “leapfrog” ahead and enable access to their resource rich markets in a transparent and low cost way. Traditional finance firms are taking steps to also leverage tokenization technology internally, and are gaining valuable insights into how it can be used to gain efficiencies and cost benefits.

Decentralized finance is finding interest from Singapore’s central bank with a pilot focused on permissioned liquidity pools. AML and KYC/KYT is a concern for many regulators when it comes to DeFi markets and their users, which had initially been designed to be open and not rely on centralized trust. Non-crypto native use cases continue to be explored to determine how tokens can be used to increase participation and engagement.

Fintech firms are evolving their business models by partnering with blockchain protocols to allow them to operate within the new digital asset ecosystem and provide their existing customer base access to the benefits and gain new customers. Investments into crypto-focused start ups continue to flow as they seek to provide the necessary solutions that existing financial systems are not able to adapt to.

Digital asset firms are working together to come up with a solution to meet compliance standards addressing anti-money laundering concerns. Regulators are taking more steps to introduce regulation around stablecoins, their legal status and therefore acceptance as legal tender. Retail investor protection continues to be raised as the main concern for regulators.

Central banks’ mandate to ensure financial system stability continue to be top of mind as they look for ways to create a retail CBDC, and gain the efficiencies and benefits of a digital currency based on blockchain technologies.

With more focus on the carbon credit markets, existing players are tightening up their requirements for the use of both existing and new carbon credits issued. Traditional finance is forming partnerships with carbon standard setting organizations and funding carbon focused ventures as the move towards net zero in 2050 gains momentum.

May was a difficult month for crypto-native tokens. The market suffered an attack on confidence with the unraveling of decentralized finance protocol Terra’s algorithmic stablecoin UST and with it LUNA, Terra’s native token. Debate will continue on what led to Terra’s untimely demise, but what is clear is that market participants need to carefully manage their exposure and risk in these emerging markets.

Observers of the Terra event noticed that the contagion did not negatively spread to the whole of DeFi, in that other protocols and their dApps did not similarly crash. Participants should seek to review their criteria for participating in DeFi markets, and either take confidence in their investment and risk processes where they worked; or take steps to improve it where they did not. Supply of collateral backed stablecoin tether (USDT) fell in May, which some commentators attribute to the knock-on effect of the depegging of algorithmic stablecoin terraUSD (UST).

USDT lost parity from the U.S. Dollar momentarily but has since recovered its peg.

Most of the crypto-native markets fell on broad aversion to risky assets and rising interest rates.

Digital asset markets continued lower in May for crypto-native markets. Ethereum broke $2,172 and further weakened toward the support range around $1,700 that had been tested multiple times in 2021. After months of net outflows, May saw net inflows into exchanges even with BTC price falling. This could indicate investors taking advantage of the low BTC price not seen since July 2021.

Intra-regional flows dominate in all regions.

Falls in flows from a percentage change perspective was the greatest with North America and all the other regions. East Asian flows to Western Europe fell the most. 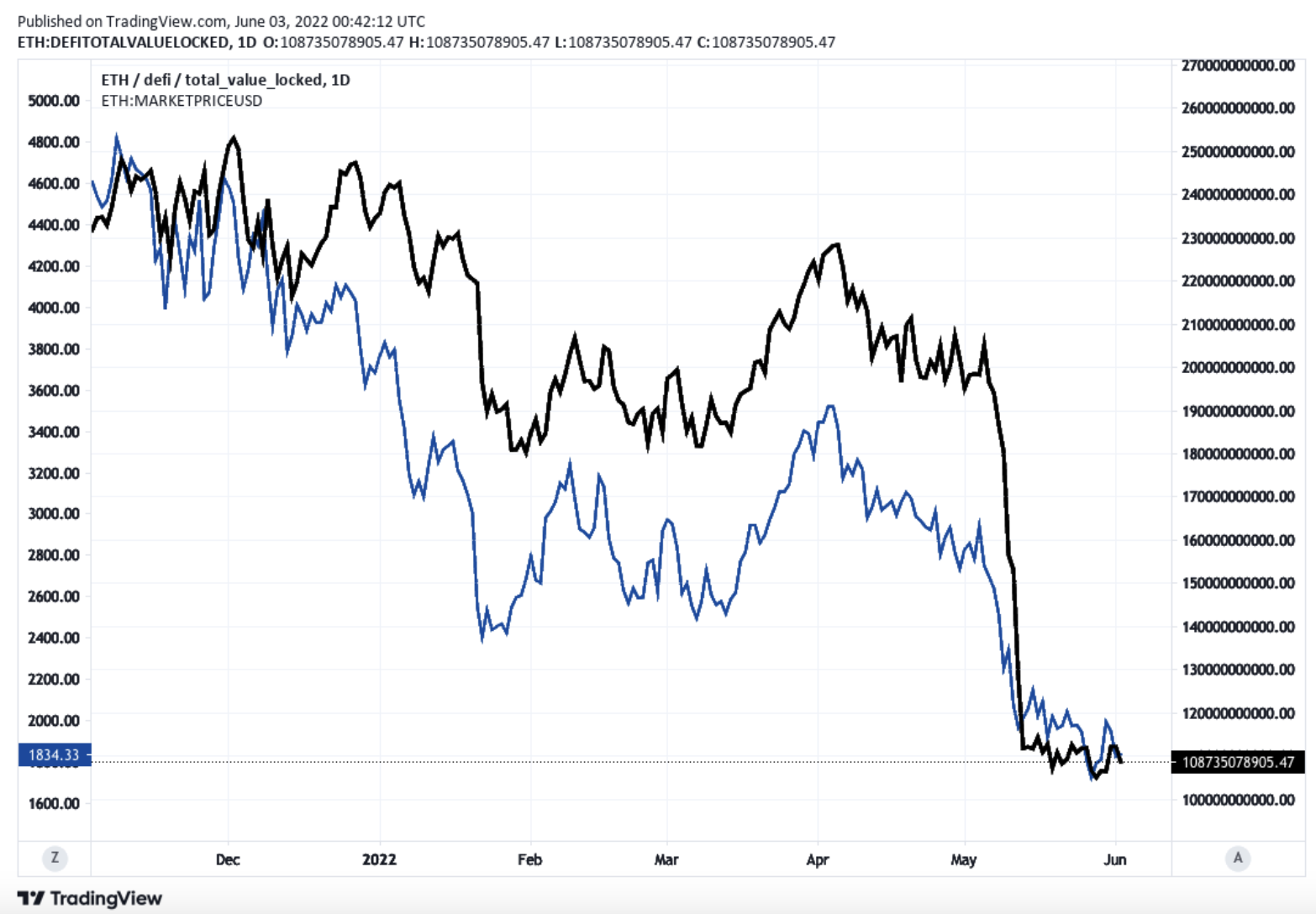 With the exception of Tron, Total value locked (TVL) for the other four protocols ranking behind Ethereum in terms of TVL fell in what has proven to be a tough month in May.

Tron lending application, JustLend, was the significant contributor to the protocols higher TVL with over $1 billion being locked during the month, a 59% increase month on month, and another $411 million by Sun.io which is an integrated platform for yield farming, swapping tokens, and self-governance.