Despite challenges faced by the digital assets and crypto space in the crypto-native arena, interest in blockchain technologies remains positive. FTX’s filing in the United States for Chapter 11 bankruptcy protection dominated the headlines for most of November. Now, more than ever, counterparty risk is top-of-mind for organizations who continue to operate and expand into the digital asset industry. Fireblocks firmly believes that the optimal solution is for organizations to have 100% ownership and control of their funds — read our 5 key principles on Direct Custody to learn more.

What do you think of Digital Asset Insider?  Fill out this quick 2-minute survey to share your thoughts.

FTX’s filing in the United States for Chapter 11 bankruptcy protection dominated the headlines for most of November. The effects of the exchange’s collapse reverberated through an already weak cryptocurrency market. Many lessons will be learned by all market participants, from venture capital firms to sophisticated investors. The process for assessing counterparty risk in the digital asset ecosystem and investment due diligence procedures will be high on the agenda for urgent review.

Brazil has made progress in passing its crypto bill, which will go before the President for approval. Blockchain infrastructure gets support in Europe by passing a policy program focused on digital assets. Financial regulators granted digital asset licenses to firms in Asia and the United Kingdom.

Stablecoins could provide a shorter pathway for central banks to bring retail customers to use digital assets versus creating their own retail central bank digital currency. A large and influential fund management firm sees tokenization as the future of markets and securities.

Scaling infrastructure and strengthening network security and technology against exploits will be crucial for the greater adoption of digital assets. Large and small investors alike want a level of privacy for their on-chain identity while at the same time complying with anti-money laundering and know-your-transaction requirements.

More central banks have announced their interest in central bank digital currencies (CBDC). Trials conducted using CBDCs have involved the issuance and settlement of digital bonds, and in the future, trials could include equities.

Crypto-native markets fell early in the month and traded sideways to end under $1 trillion in Total Market Capitalization (TMC). The catalyst for the drop in prices was the surprise in specific token holdings held by Alameda Research in the FTX ecosystem prompting a “bank run” on FTX.

Crypto-native markets ended the month of the fourth quarter lower after dropping at the start of the month on news of issues with FTX and its subsequent filing for U.S. Chapter 11 bankruptcy protection.

Digital asset markets broadly fell in November. The exceptions are U.S. Dollar based stablecoins which saw flows out of Tether and inflows into Binance USD. 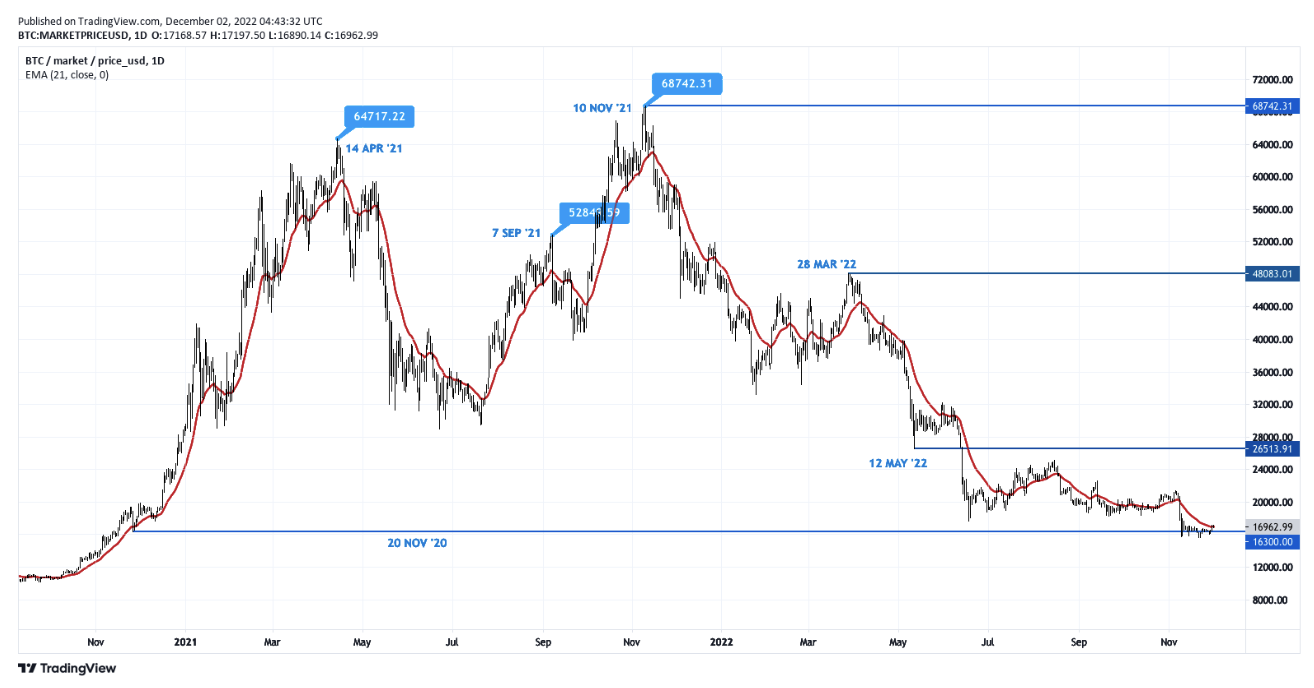 Bitcoin broke down and reached $16,000 on news of the troubles experienced by crypto exchange FTX on November 8th and 9th. Price has remained around these levels, last seen in November 2020. Netflows continued negative throughout November as concerns around holding assets on centralized venues were raised triggered by the events surrounding FTX. Ethereum remained above the $1,000 level and set a lower high starting in November. The overall trend remained down and could continue with a break of $1,000.

DeFi TVL continued to move sideways along with the underlying token prices.

Total value locked (TVL) for the protocols ranking all fell, with the most significant reductions being Avalanche and Tron.