This past month, we saw digital assets go mainstream with well known financial institutions, who are starting to make them more accessible as investments and for loans. The start of the second quarter saw digital asset markets taper off back towards March lows. Institutional DeFi adoption has also continued to grow in April, with Fireblocks expanding that access with new support for DeFi protocols, including DeFi on Terra, Moonbeam, and XDC.  We are also really excited about our new FIS partnership, which will make it easier for TradFi firms to adopt digital assets quickly and securely.

Digital assets are reaching mainstream consumers through retirement accounts and as accepted collateral for loans by large financial institutions and smaller start ups. A financial institution behind a spot-based exchange traded fund (ETF) has challenged the United States Securities and Exchange Commission in their rationale for denying spot-based bitcoin ETFs but approving futures-based bitcoin ETFs. Meanwhile, numerous cryptocurrency ETFs in Australia are in the process of being launched despite technical delays.

From investment banking to asset management, financial institutions across the board are showing greater interest in tokenization using various token standards, including using non-fungible tokens (NFTs) as a certificate of ownership on a blockchain protocol. Tokenization on both permissioned and public blockchain protocols is also being explored, highlighting the importance of the interoperability of digital asset infrastructure to reduce friction and transaction costs at this early stage.

Financial regulators are calling for more dialogue with crypto firms to bring them under the regulatory umbrella. Global regulation coordination is needed to reduce regulatory arbitrage, formulate a consistent definition of what constitutes a digital asset, and determine how digital asset use cases will be recognized in their various forms.

As digital assets begin to be accepted as payments, two things must happen. First, corporate treasuries will need a secure custodial wallet. Second, corporate treasury leaders will need to be able to exchange cryptocurrencies held to fiat, and determine how best to hedge their cryptocurrency exposures, which could include derivative instruments like options and futures.

Decentralized finance platforms are recognizing the need to incorporate compliance standards to reduce the exposure of their services being used by those involved in illicit activities. DeFi platforms have formed partnerships with credit provisioning firms that enable them to provide services that give them better access to the asset management industry.

Centralized exchanges continue to set up a presence in favorable regulatory and business environments in the Middle East region. This could put competitive pressure on jurisdictions such as Switzerland and Singapore, who historically have been considered the most favorable markets for crypto-native firms.

Firms offering cryptocurrency services like custodial wallet services will be required to become licensed or register themselves with financial regulators in order to operate their businesses. We expect this trend to continue as more countries seek to manage their citizen’s exposure to and use of digital assets.

Central banks globally have continued to conduct and report on project outcomes that have been underway for many months. There is no shortage of interest in working on wholesale focused CBDC projects that include research into the technology that supports CBDCs. The time horizons stated encompassing these initiatives are as soon as within 2022, or further out towards 2027-2028.

For there to be an active market in carbon credit trading, there needs to be a greater number of participants who have access to the infrastructure that provides the liquidity to trade these markets. The trading infrastructure may come in the form of centralized or decentralized exchanges. Financial institutions have existing clients who have a need, if not a requirement, to meet carbon emission targets. They are increasingly looking for the right infrastructure providers to connect to, develop on, and green firms that have access to verifiable green projects that are not ‘greenwashed’.

Bitcoin, Ethereum, and most of the Altcoins retraced most if not all of the gains achieved in March. Net Exchange flows for Bitcoin were net outflows everyday in April, and indicative of how the markets were broadly seeing cryptocurrencies at the start of the second quarter. Total Market Capitalization fell below $2 trillion, and DeFi markets as represented by Total Value Locked remained over $200 billion. This could indicate some resilience and continued interest in DeFi protocols and dApps, and their ability in attracting capital (An example of which we observed with Fireblocks’ launch of its support for Terra).

CHART OF THE MONTH: U.S. Stablecoins Altcoins broadly sold off over the month. Bitcoin retraced towards the March lows around $38,000 and set $48,000 as a lower high acting as resistance. The higher low set on 24 Jan at $33,225 serves as a line in the sand for market participants bullish on Bitcoin. Failing which the $29,000 area will come into focus. Ethereum will maintain a higher low if it holds above $2,600 going into May. A break of $2,172 could indicate further weakness ahead. 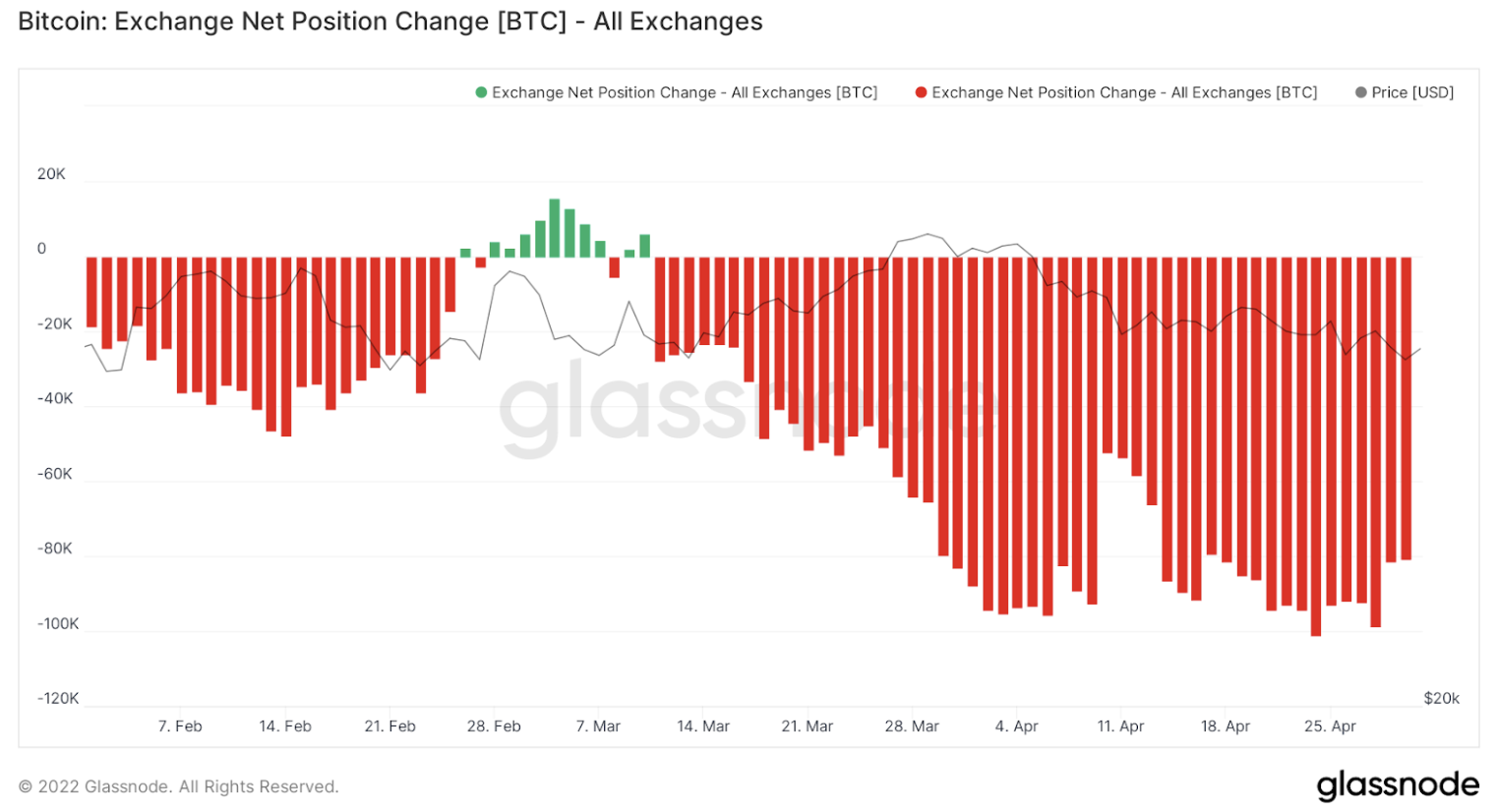 There were no days in April with net inflows into exchanges with BTC price falling. Regional flows have fallen back below $200 million and remained predominantly intra-regional.

Falls in flows from a percentage change perspective appeared between North America and East Asia. Total value locked (TVL) for Fantom has continued to slide towards the levels where FTM surged at the start of October 2021. The fall in TVL has been most notable intra-month in February where the Solidly dApp saw a surve in TVL as part of the “Solidly Wars” highlighted in March’s Digital Asset Insider. The outcome of this event and the departure of key Fantom “influencers” highlights the protocol risks market participants need to consider before investing.